How could we, through a new way of interacting with our digital photos, increase their emotional value? 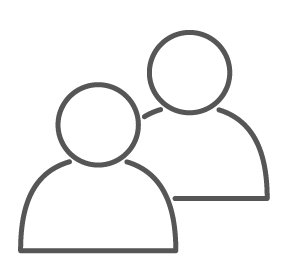 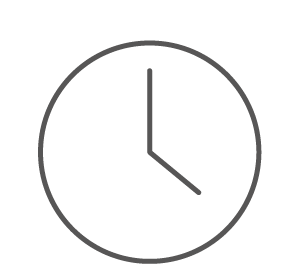 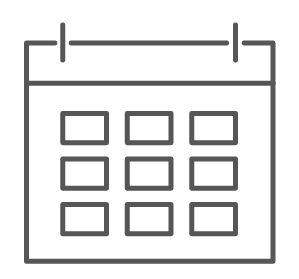 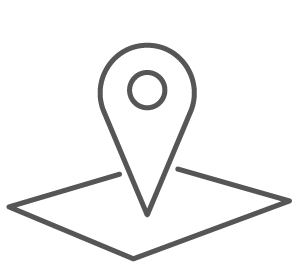 Umeå Institute
of Design
tools & methods
ADOBE XD
AFTER EFFECTS
ILLUSTRATOR
PROTOTYPING
USER RESEARCH
background
The smartphone has changed the act of photography by enabling users to whenever and wherever to take a photo. Most people are nowadays walking around with thousands of pictures on their phones - pictures that they almost never look at. Photos are keys to our memories and our identity, which is why they are important. Nevertheless, the amount has made it an overwhelming task to sort them, and photos are getting lost in the mass.
outcome
This project recognizes that today people take photos for many different reasons, such as keeping them as memories, to communicate, to remember something, or to express identity through social media- all of this leading to a huge amount of photos. Pixels, therefore, enable the user to already by the moment a photo is taken decide the potential value of the picture. The project consists of a redesign of the mobile camera as well as a management system for the photos collected.  The aim is to create a smaller, more valuable collection of one's photos, cherishing their later emotional value.

How many pictures do you have in your phone? When was the last time you actually looked at them?

PIXELS aims to make us more connected with our memories by providing support in managing our digital photos, through highlighting that, today, we take photos for many different reasons!

Scenario: A day with pixels

Anna uses Pixels and can choose already when the photo is taken if it is something she might want to save for a longer time, as a memory, by choosing the option Auto Tag.

She uses the Short Time Use option for a photo of a shopping list she knows she will only use later the same day.

At work, Anna usually takes photos of notes during meetings. Now she has created a special Tag for this and can directly sort them into this category at the moment the photo is taken.

On the way home, Anna gets support from The Helper which sends her a notification asking if she has 5 minutes over to do a Photo Task.

The Helper has detected that Anna earlier this morning took 15 similar photos, and now suggests she pick which ones to keep. Anna can agree with The Helper or edit the pre-made suggestion.

Later in the evening, Anna is looking at photos together with her children.  Because of the already made sorting, through Camera Tags and support from The Helper, it is easy for them to find the photos that actually matter and to enjoy those memories together.

Why interacting with your digital photos is important 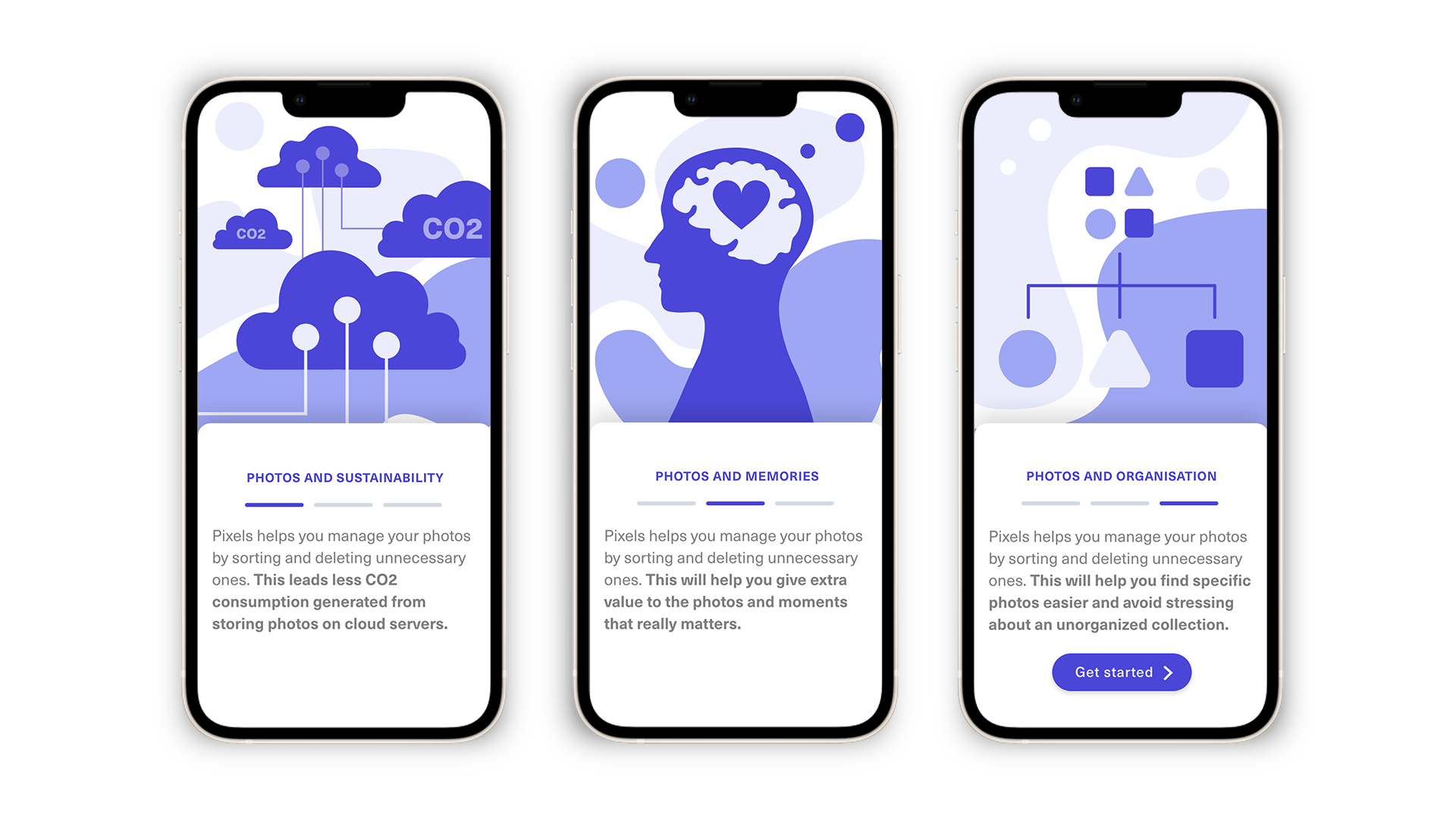 Re-designing the act of taking a photo

At the same moment, the photo is taken, the user has the opportunity to Tag the photo. The first pre-set Tag is Auto tag, which, using A.I, generates an automatic one depending on the motive ad location. The second Tag is Short Time Use, for pictures taken out of practical purpose, only valuable for a shorter period of time. The third option is to use a Personal Tag, created by the user themself.

While opening the photo album the user will see the "Short Time Use" photos displayed on top. This is for them to be accessible but also so that the user would see if they have a photo in that category that they actually would want to keep and avoid it being deleted. The user can also search photos by tags that were either added manually or auto-generated by the photo service's A.I. 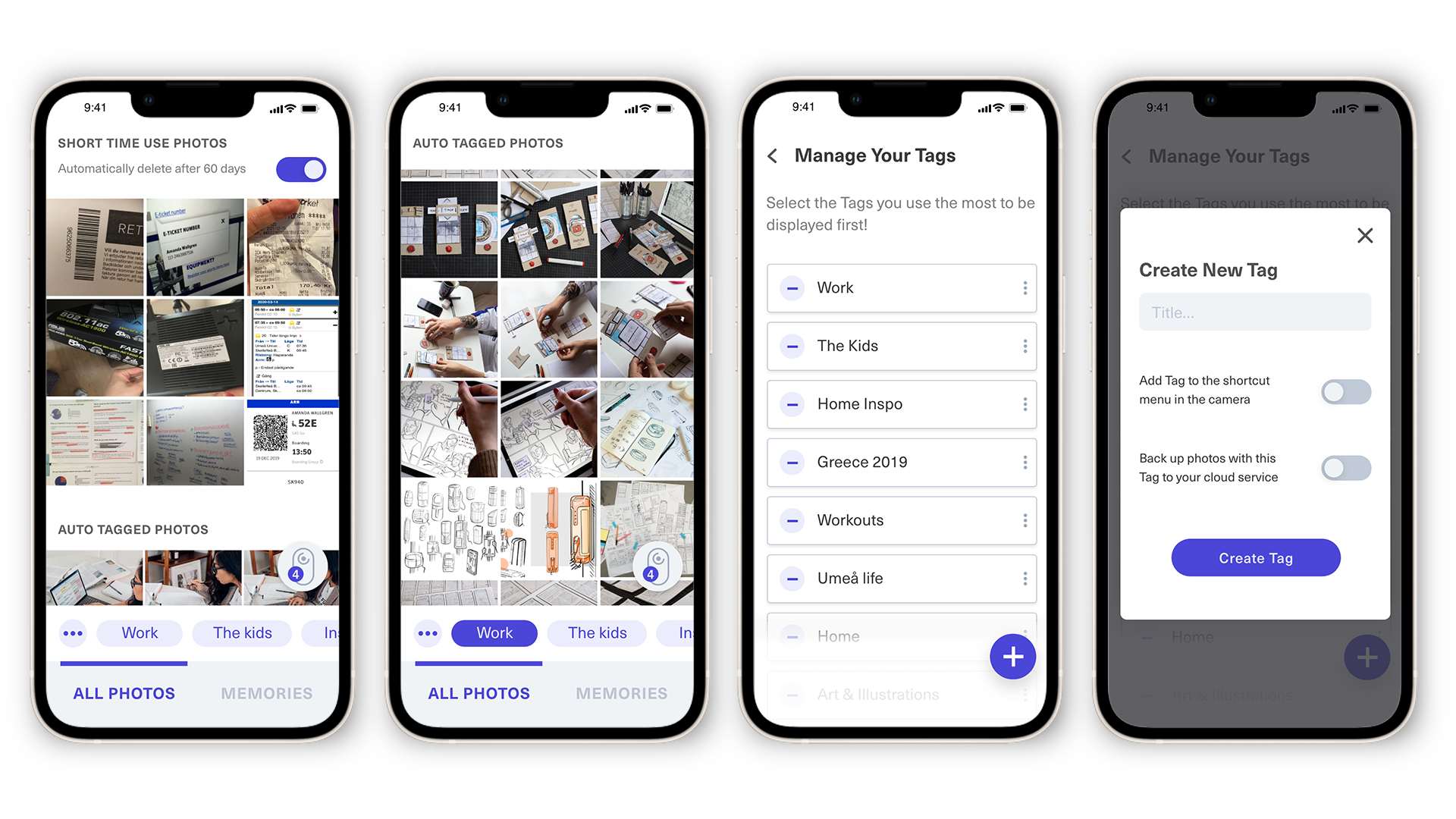 UseThe Helper to sort your photos

The Helper creates different tasks where the user has to sort and make selections among their photos. By performing the various tasks, the user can see their progress through information on how the tasks have contributed to storage gained as well as a more sustainable digital lifestyle. 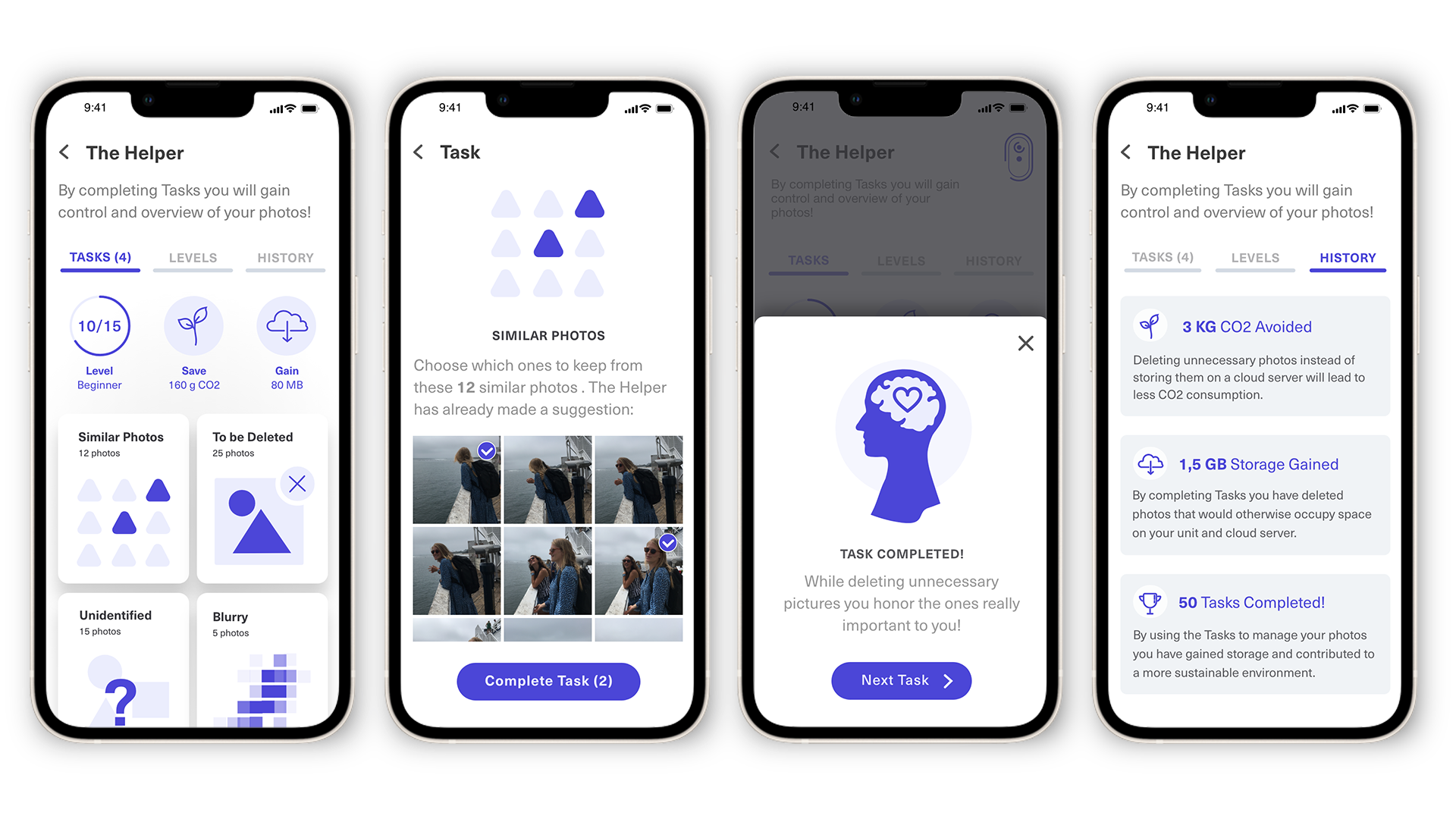 The Helper & Gamification
Do tasks
Get Reminded why
Get Motivated

From the photo collection, that is selected to be kept as memories, Memory Sections can be created by adding text or music. By spending time with the photos that really matter their emotional value increases! 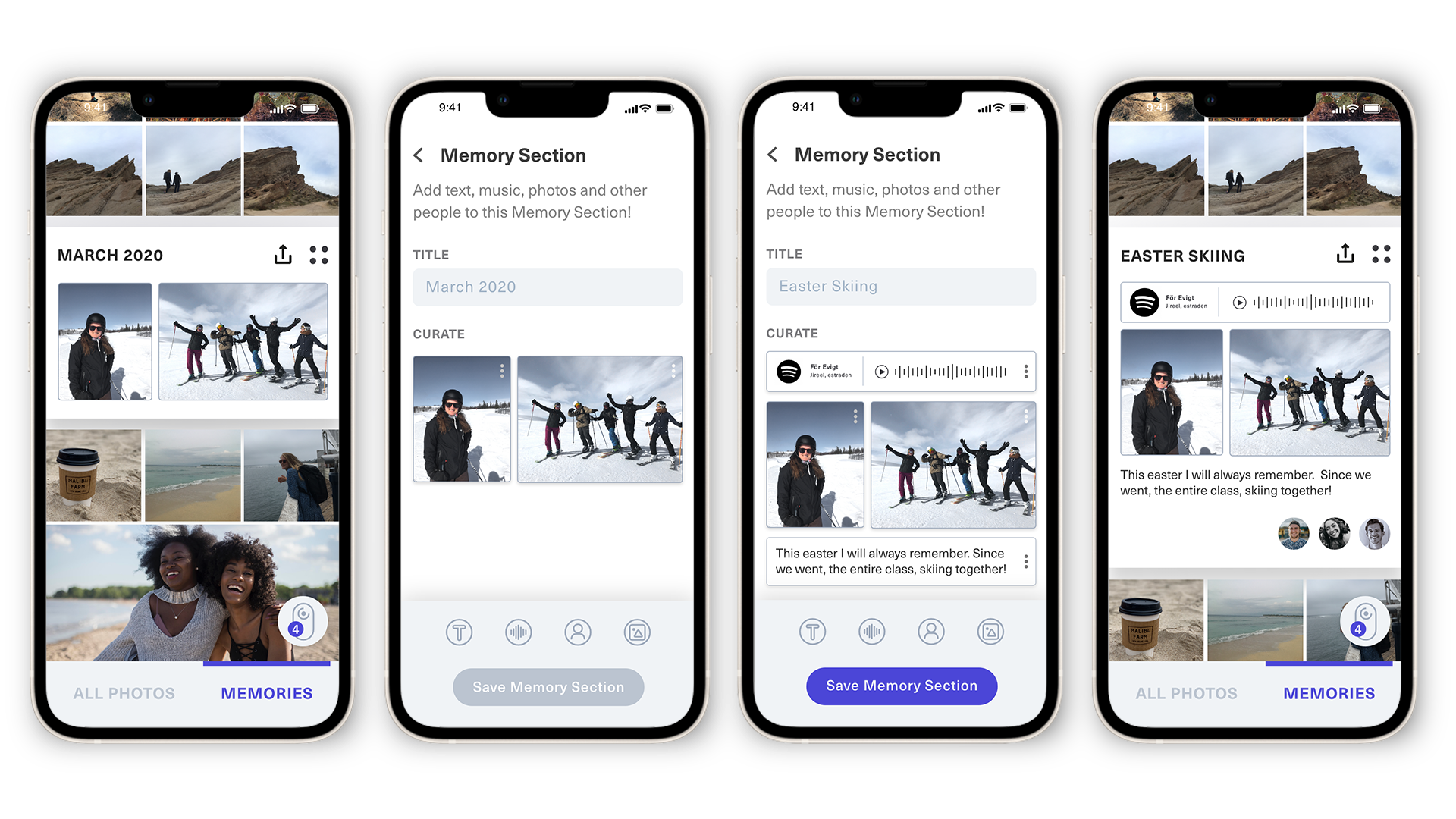 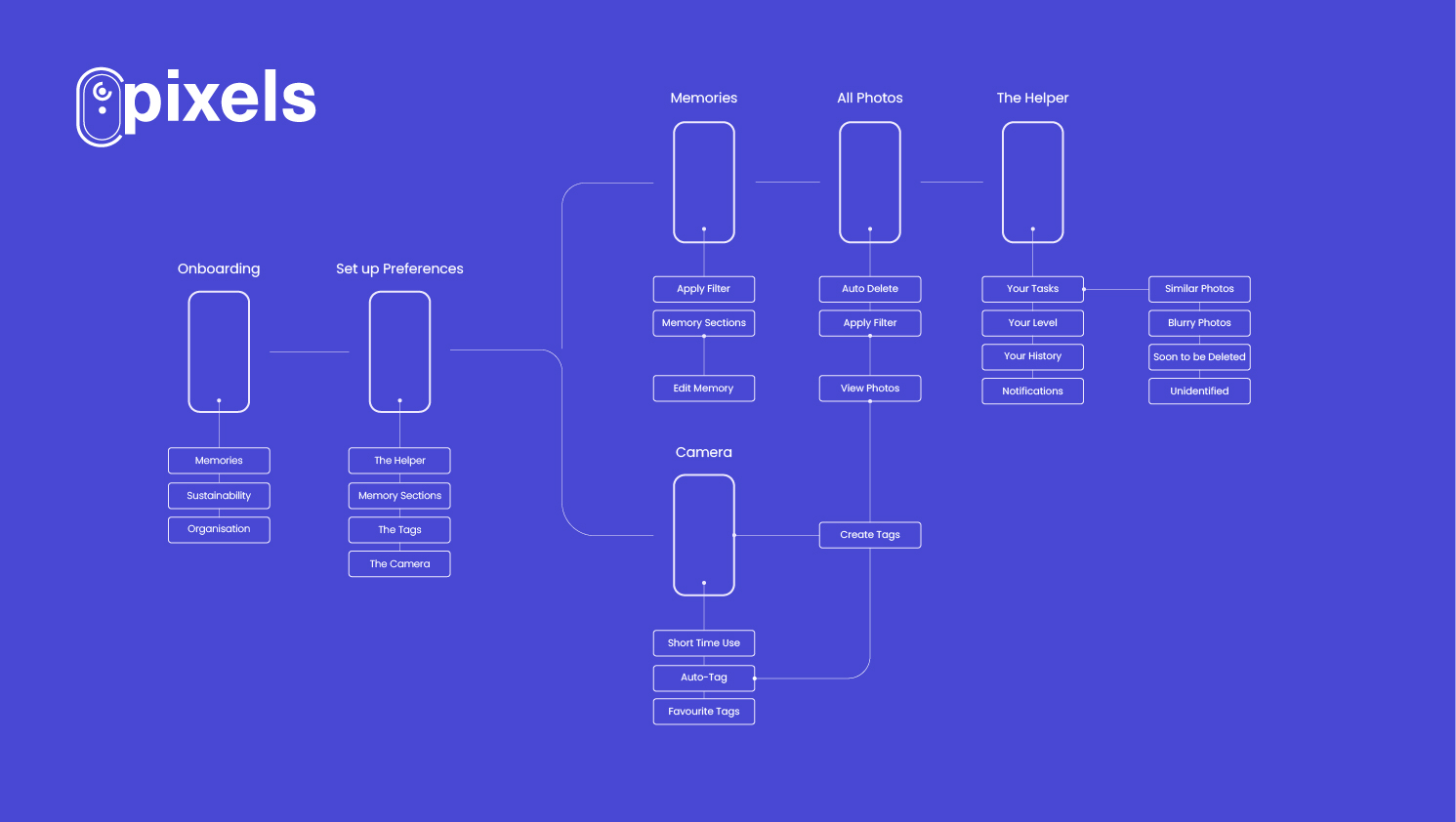 For quantitive research, a survey, asking people about basic facts regarding their mobile photos, was sent out at the beginning of the project. After this followed a more qualitative research phase where both potential users, a researcher within cognition, an owner of a digital photo book service as well as experts within the area of tech and digital media, were interviewed. 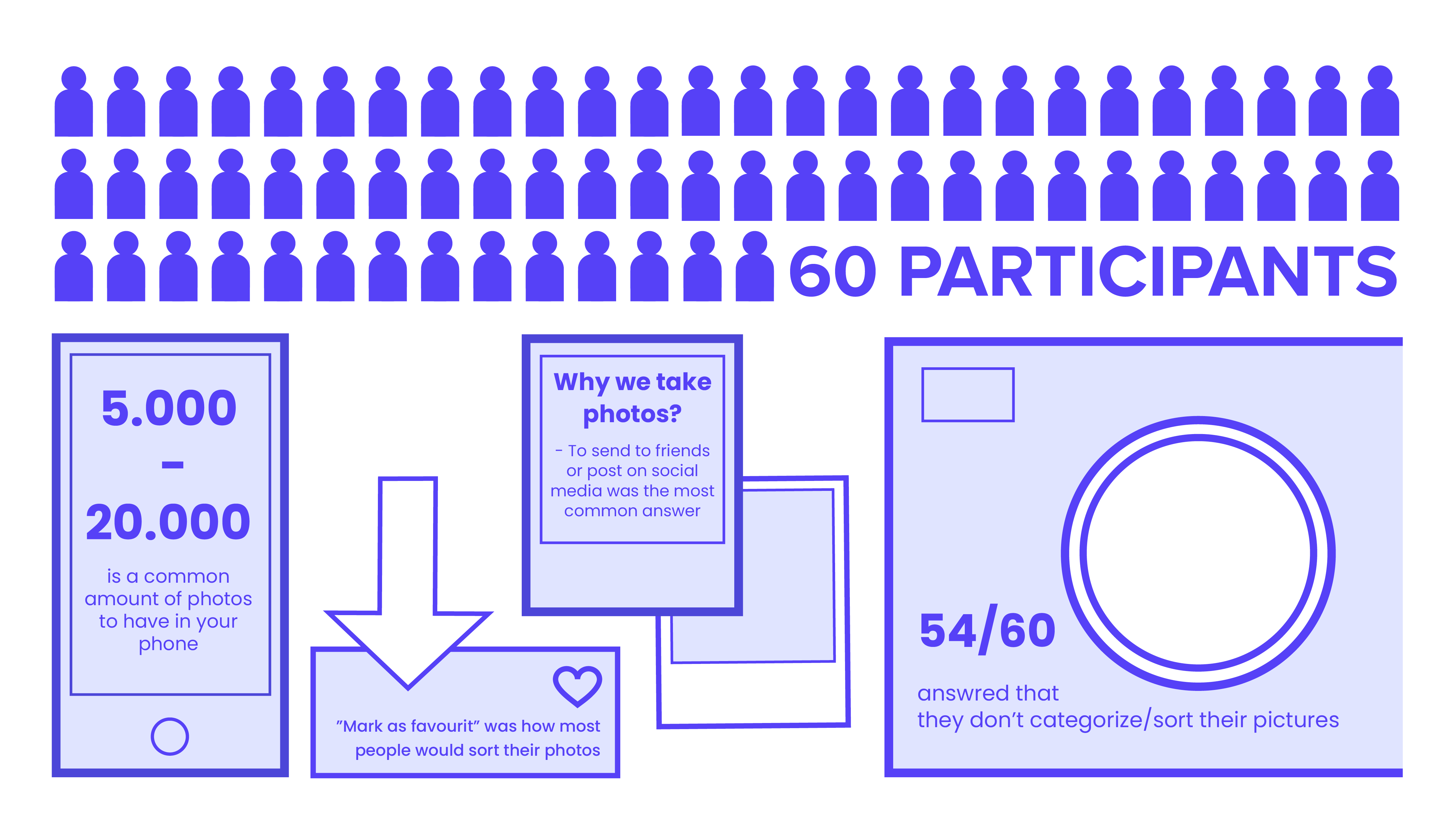 You take 20 photos of the same "moment" with the idea that you will only keep the best - but in the end, you have 20 pictures from each occasion and you just scroll past them without really looking.
- Quote from a parent regarding taking pictures of  their children 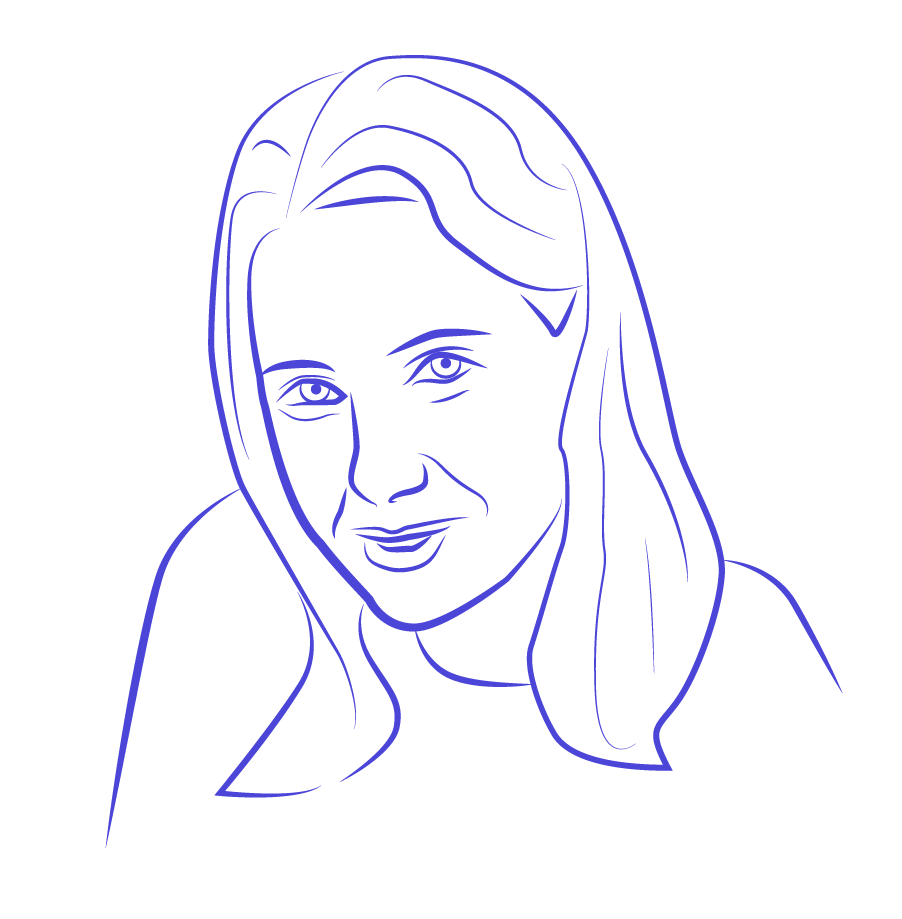 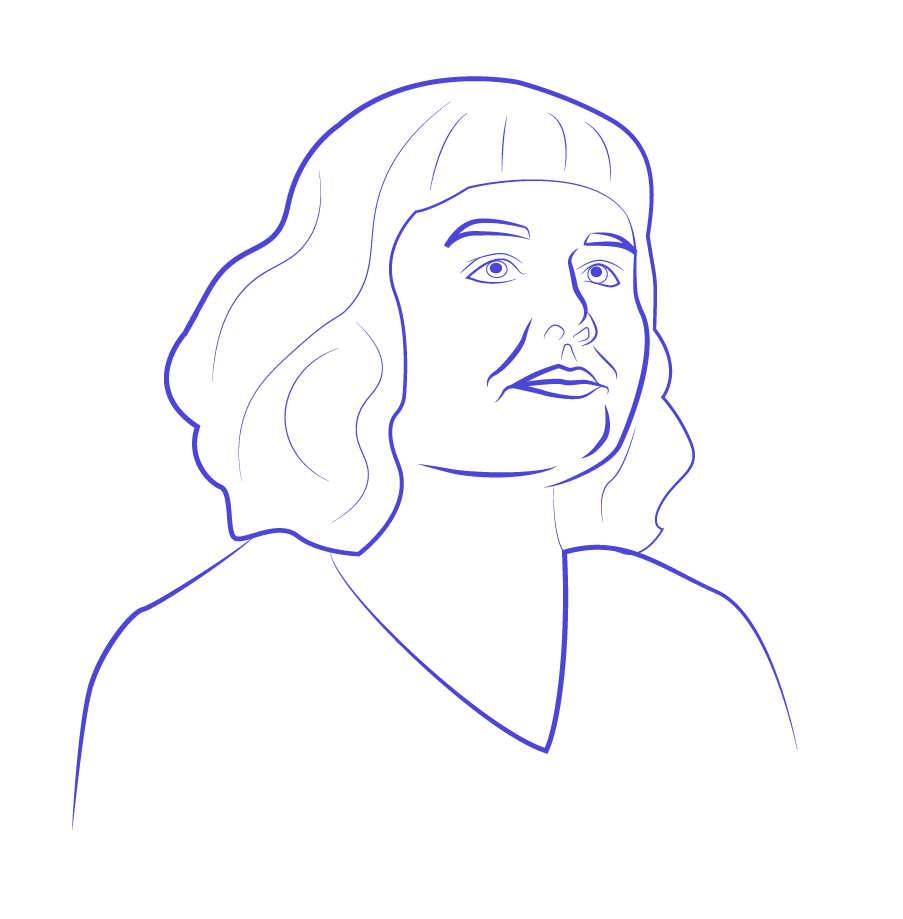 I've talked to many who say they have 6000 pictures on their hard drive that they can't sort. It's the same anxiety as having 6 shoeboxes with unsorted photos in the attic. We have now moved that problem away from us by storing all the photos in the "cloud". All of a sudden it's not "me" who has the shoe boxes in the attic but Google.”
- Quote woman working with tech 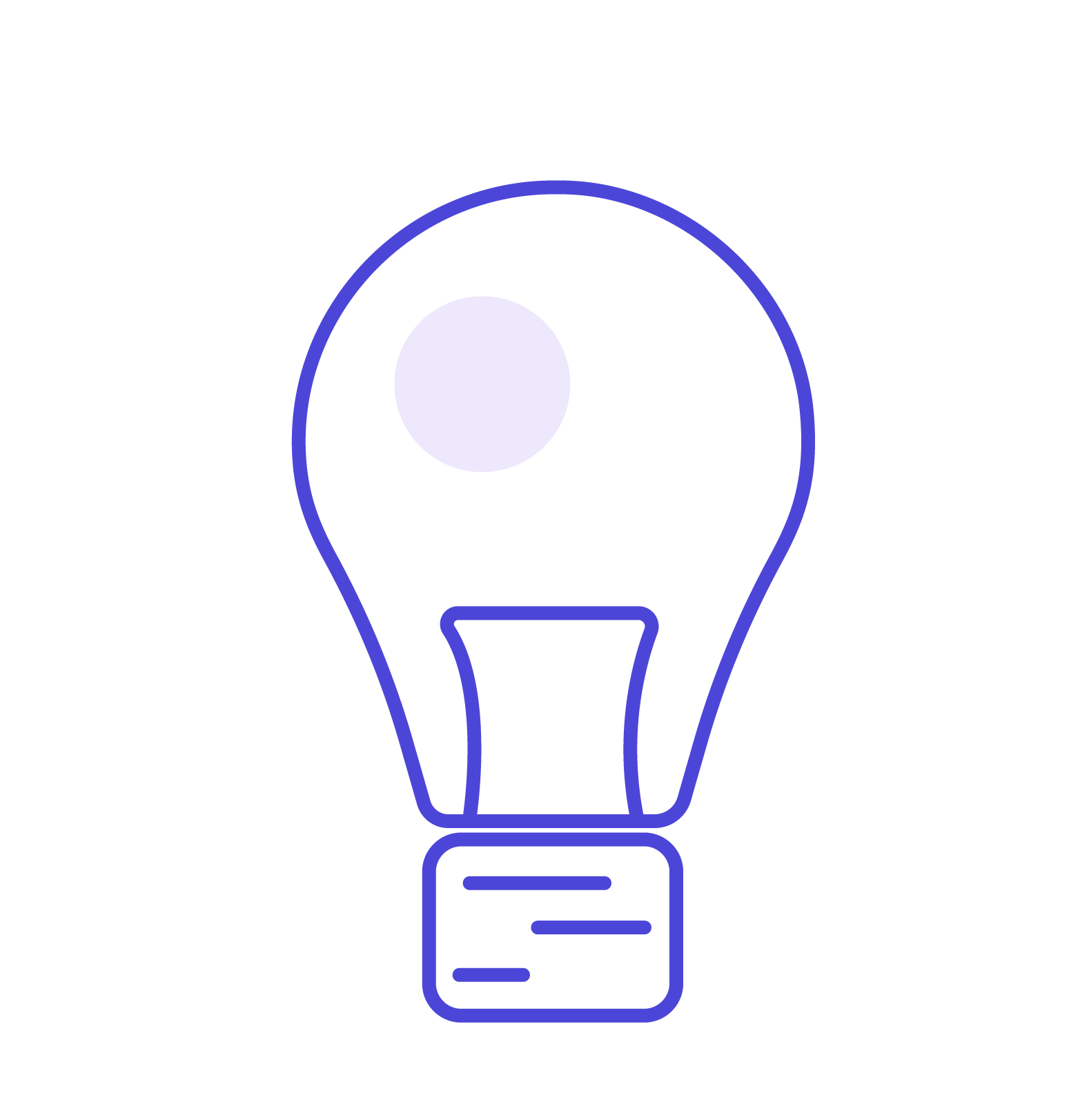 A reason for the huge amount of photos is that today we take them for many different reasons, some taken to keep as memories while some are only valuable in the moment!

Different reasons to why we take photos

Today we don't take pictures for the sole purpose of documenting memories, there is a whole new category of images that we just "wear and tear". A large part of all the pictures we take is only valuable in the moment or during a shorter period of time. The photos can be about communication (eg. a picture of you on the bus sent to a friend only to say that you are on your way), identity creation (eg. to put on social media), or simply as notes to remember something (eg. a picture of a shopping list or a price tag). 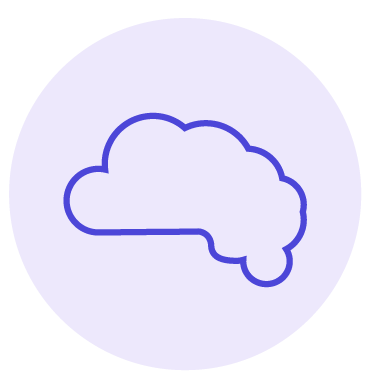 Photo taken to turn moments into memories
short term use 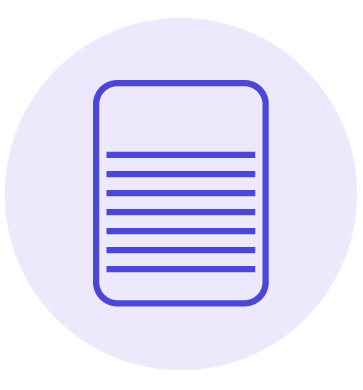 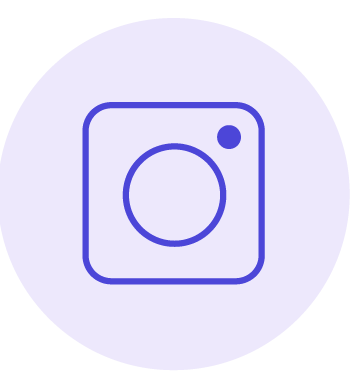 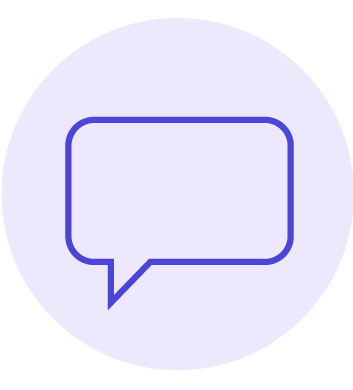 Photo taken to create identity, through social media, etc
Photo was taken as a way to communicate
Photo taken to remember something

What if the experience of taking a mobile photo could be redesigned to differentiate reasons for WHY the photo is taken - to later make it easier to manage?

Cardboard mockups of how alternative phone cameras could look like

Everyone agreed that prototype 3 was the most preferable one. This is because the handling of "swiping" up / down felt simple, and has become a gesture we are used to performing. 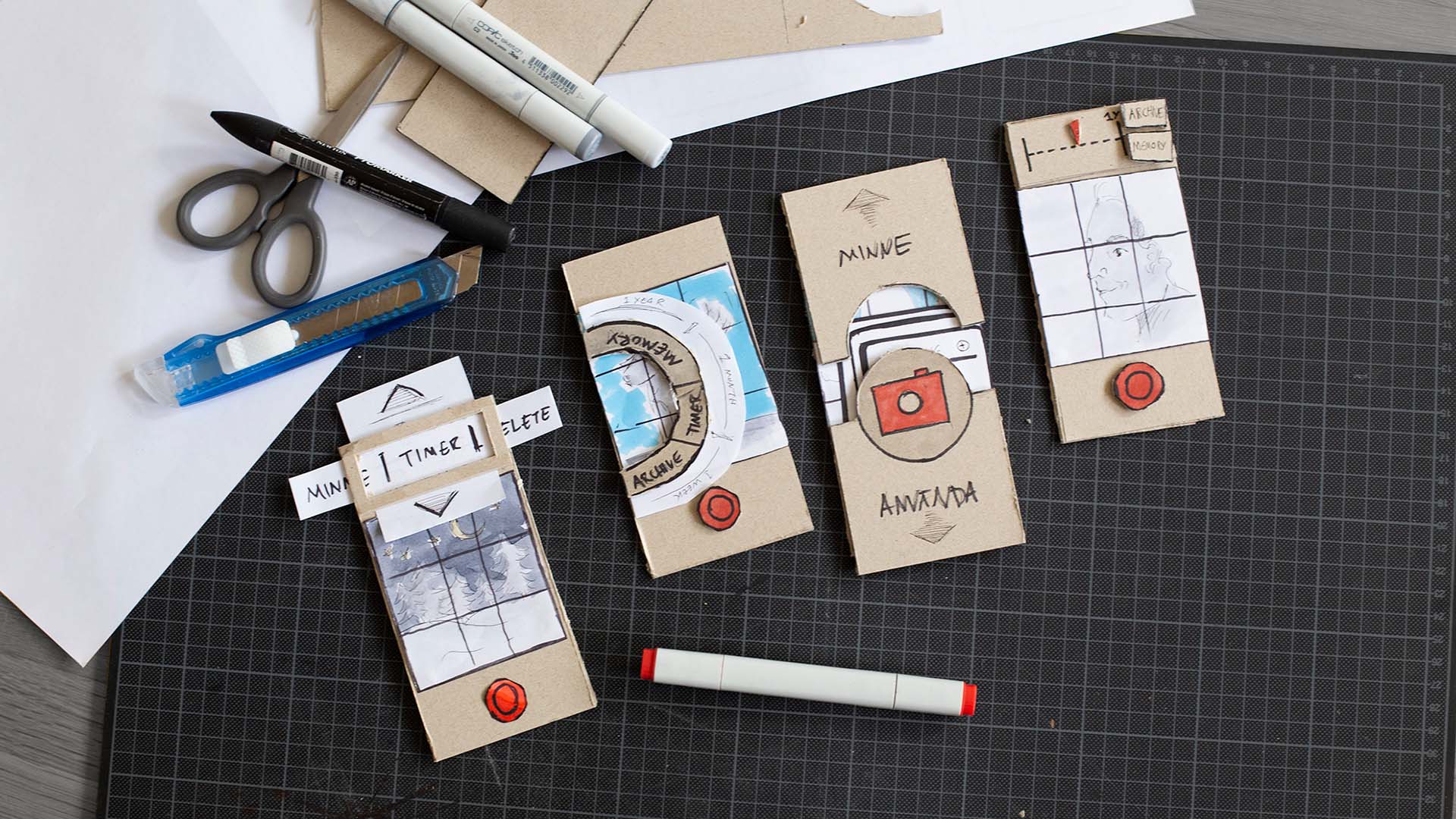 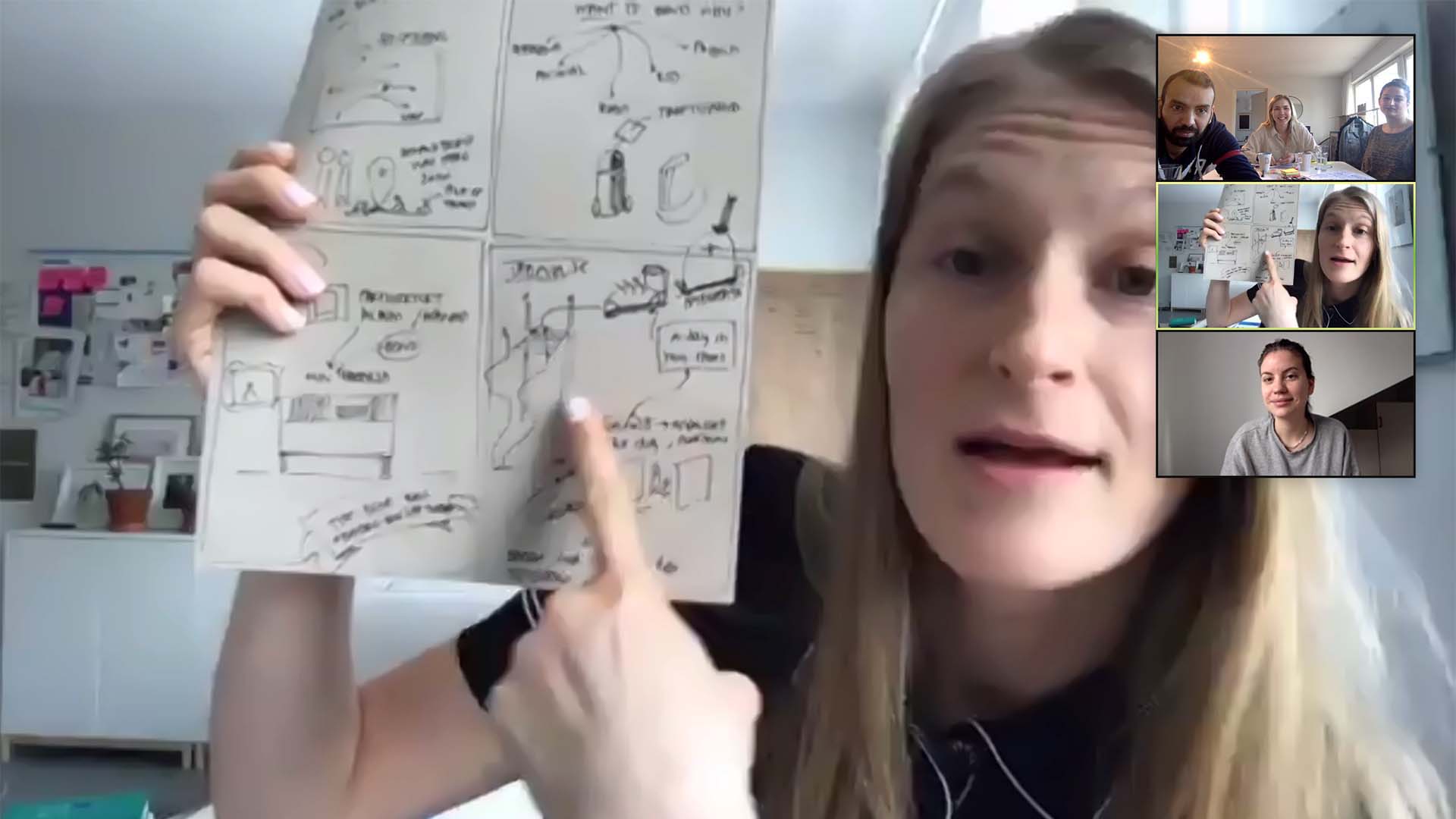 Pixels enhance the emotional value in digital photos by allowing the user to interact with, prioritize, and categorize them right from the start. This way, users can shape a valuable product from their digital photos!

The schedule I created at the beginning of the project could not be kept completely as this spring turned out to be very different due to the outbreak of Covid19. This meant, for example, that it was no longer possible to use the school's premises for work. In addition to this, all planned visits, workshops at the partner companies, as well as interviews, were canceled or replaced by online meetings. I believe that if the project had been conducted a bit later when we had already gotten used to this new setup this would have been fine, however, because all was so new, a lot of time was lost in the transition. Nevertheless, these were learnings that forced me to find new opportunities.

​If the project were to continue to develop, it would be interesting to look at what happens to photos over time. Both how time affects the value of the photo, as well as the one's relationship to it. This is because an image that does not matter at the moment years later can become very important on an emotional level.

Google Photos:
Google photos has a more advanced app where it is both possible to edit your memories even further but also at the sam time create a hard cover photo book.
It also has something caklled Assistant which somethimes will give you suggestions on "clearing up clutter" or "rotationg images". 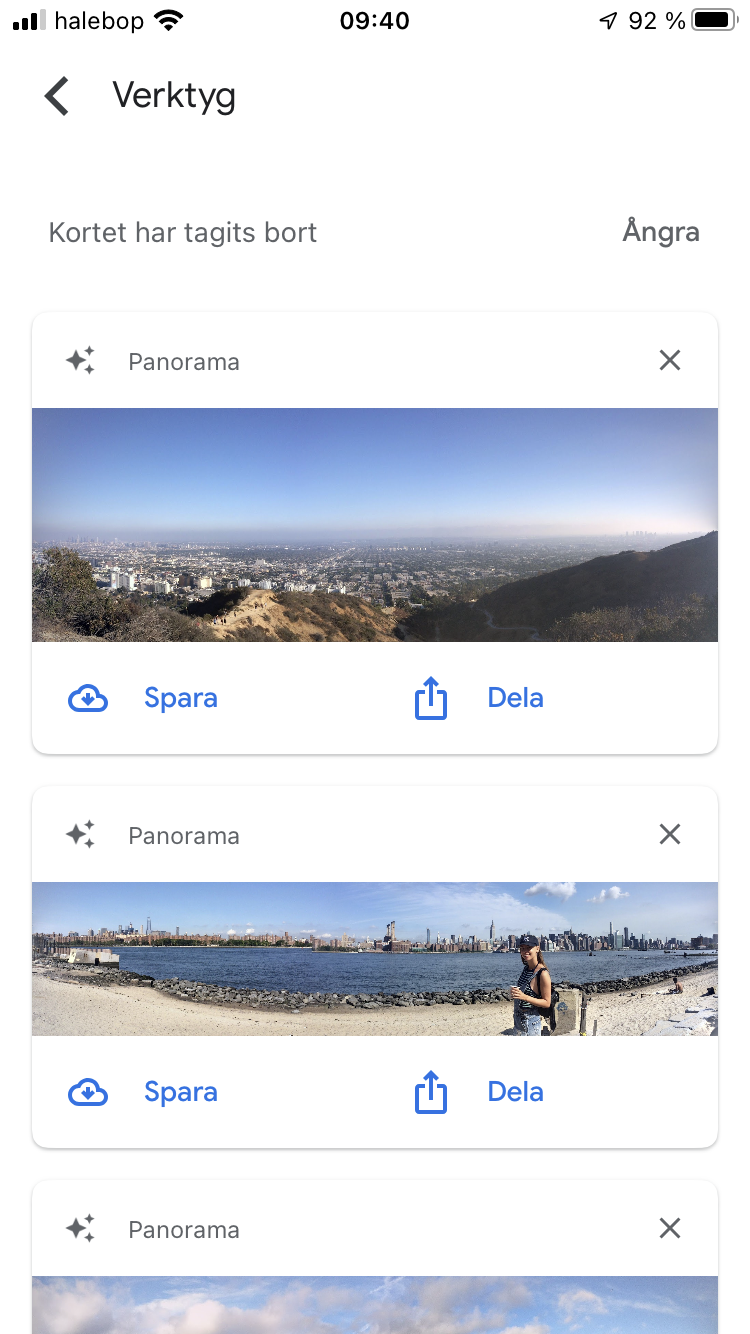 iPhotos:
Iphotos collects and creates memories for you, that one can to a certain degree edit. However many people I spoke to in the project mostly found them cringe and that they did not enable a personal connection due to that one had not selected the photos oneself.